A Car Preparedness Kit is a Lovely Thing

In 2011, I read his story and realizing that I did not have jack in my car to survive, I took some lessons from it and got my car outfitted. Here’s what I learned about a car preparedness kit:

1. Have a visual signalling device

If you are injured or extremely fatigued (which will happen if you haven’t had water or food for several days), you may not have energy to yell. A visual signalling device, such as a flashlight or a signalling mirror, can alert the folks who are looking for you. They are small and inexpensive, here’s the one I carry.

I carry a solar lamp/flashlight/signalling device because if I ever get stuck for a long time, I can recharge it in the sun during the day. The one I have has a setting for flashing “SOS” in Morse code  – which I would depend upon if I were injured. Plus, when we have a prolonged power outage, I can use it in daily life as an additional light source. I’m really happy I have one in the car. Here’s the one I have.

2. Be able to escape

OK, I don’t know about you, but every time I see the movie Beetlejuice, right before Alec Baldwin and Geena Davis’ car falls into the river I think to myself, “If only they had a seatbelt cutter/window breaker in the glove compartment.” I can’t help that I’m always thinking like a survivalist/prepper.

A small combination seatbelt cutter/window breaker can save your life in the event of a watery crash. I read an awesome review of this sort of tool: First, the guy took the tool to a local scrap yard and tried it out on some old cars to make sure it worked. Very smart. Then, he took things a step further by mounting two of these in strategic locations in his car and adding straps. His very sound reasoning is that 1) you want to be able to reach the tool from both the driver and passenger sides, and 2) you don’t want it to fall from your hand while using it. Brilliant!

If you don’t have one, here’s the set that was reviewed. I figure if it was good enough for that fella, it will work for me. I’ll mount mine like he did when I have a bit of time this winter.

3. Be able to make noise

Mr. Lavau was able to respond vocally to his son’s calls down the ravine. But, again, you have to consider that if you are hurt, fatigued or dehydrated (see #5 below), yelling may be difficult or impossible. I keep a whistle in the car that’s easy to blow. It’s a low-tech way of signalling that any rescuer would recognize. This is the whistle I have. I keep it in the glove compartment.

4. Use a survival blanket for double duty

A survival blanket makes an excellent signalling device. There’s a survival blanket that’s two sided — orange on one side, that Mylar material on the other side. Either side will catch the attention of a rescue team and keep you warm at the same time. I have the blanket in orange. 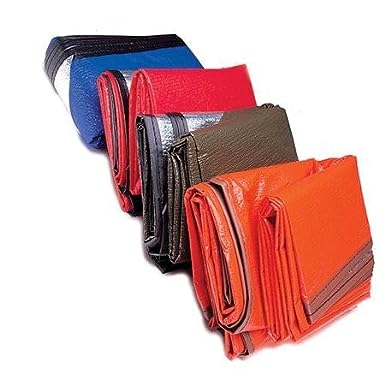 In story after story about folks surviving a crash down a ravine, there always seems to be a struggle to hydrate.  For instance, this man in the UK crashed into a river and still had to use a hanky to gather drips of water to drink (I think he could have used a seat belt cutter).

I keep a few gallons of water in the car – it’s been surprisingly useful for non-emergency reasons (like just for drinking when we were stuck in a traffic jam once or for rinsing off muddy feet after a hike).

I also keep a Lifestraw in my kit. I do not want to ever be placed in a situation where I, or my loved ones, would be forced to drink yucky water. The implications of this can be serious. If you don’t have a Lifestraw one in your car, please consider one when you can. Amazon has them at a good price.

6. Spam is better than bugs

If I crashed into a ravine and was blessed enough to survive, I don’t want to eat bugs to subsist while I wait for help because I’m injured. Mr. Lavau ate black ants, for instance, to survive. So I keep a small kit of non-perishables in my car kit. Currently, I have some Spam, sweetened condensed milk and some granola bars. I keep them in an airtight box (try the gasket boxes from a company called Sterilite, they’re awesome and easy to find in a local store – they’re too expensive on Amazon, but go take a look so you can see them). Not gourmet, but not bugs either.

Now then, where were we?

Your car has tumbled into a deep ravine. You’re not seriously injured, but the ravine is very steep and you’re pretty shaken up. You don’t think you can crawl back up. And your cell phone gets no signal.

But you were smart. Your emergency kit is rich with food, water and signalling devices. So you pop it open, refresh yourself with some cool water and a granola bar (it’s kinda hard but you’re happy to have it) and set to work finding the best place to set up your solar signalling lamp and start signalling for help.

Because you were prepared, you know that you’ll be found.

We’ve only scraped the surface of car preparedness, there’s loads more. What are your favorite tools for being car prepared?

Emergency tools I keep in my car:
This solar lamp will flash SOS for you.
A survival blanket can save your life and signal help.
Seatbelt cutters – there’s two in this pack and they are inexpensive.
Tags: car, David Lavau, food, OK, Photo Credit Volitare88, SOS, survival food, uk
Previous Post The First Glops Have Hit the Fan, Do You Have Enough Toilet Paper?